We’ve kept this a secret for almost a year now (we were quite embarassed of our kashongaan), but I think it’s about time I share one of our major “Fail” in one of our travels.

It was my birthday trip to Italy right? We booked a cab going to Stansted Airport since it was an early flight and we didn’t wanna hassle ourselves with rush hour, train transfers and luggage. Arriving there I reckon almost 2 hours early, we got swayed by the displays and being the “tech-loving” people that we are, we spent most of our spare time at Curry’s where they had a massive sale. To cut the story short, we ended up buying a GoPro Hero 4 thinking it would be a good addition to our trip (even though I had my massive DSLR with me) and we could use it for our videos and later on in life. Hahaha. After the kaching kaching from the cashier, like two toodlers, we were excited to open our new shiny goody. We still had time we said, so yeah, we did the unboxing right there in the waiting room. We didn’t even bother to check which gate we’ll be in until…..

We snapped back to reality and checked the time. Holy F!!! It was just 5 minutes to our flight!!! We rushed to our gate which was a shuttle away from where we were. Had a marathon and yes, I would have loved this to end like the movies where we were able to catch the plane but nope, this is real life so yes my folks, we missed the flight. We missed the freakin’ flight!!! Gelo was obviously upset, I heard a lot of tsks and grunts and “dapat kasi di na natin binuksan eh” and “para kasing mga bata, masyadong naexcite eh” but what can we do? Having the talent of remaining cool on these kind of situations, I just kept laughing and smiling. I honestly found it funny. We evetually had to go back to the counter and of course, buy new tickets. My only worry was not getting a flight the same day but luckily, there was just 2 hours wait to the next one. Also, I had to close my eyes to 200 extra quid we had to pay for getting another flight. Haaaaaay! Breathe in, then out.

So yeah, major fail. While waiting for the new flight, we didn’t even touch the camera anymore. And yes we kept on checking the time and gate. And yes, after some cool down, Gelo was already laughing about it. It was a nice and expensive experience though, and never again were we late for our flights. Also, never again would we get distracted by these toys/gadgets.

Here’s our first picture with our GoPro named: Stansted. We made sure we used it again till boarding time. Majirap na! 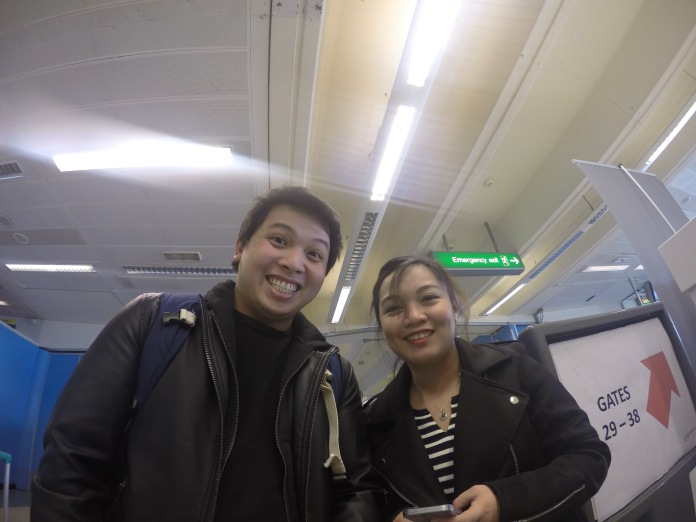